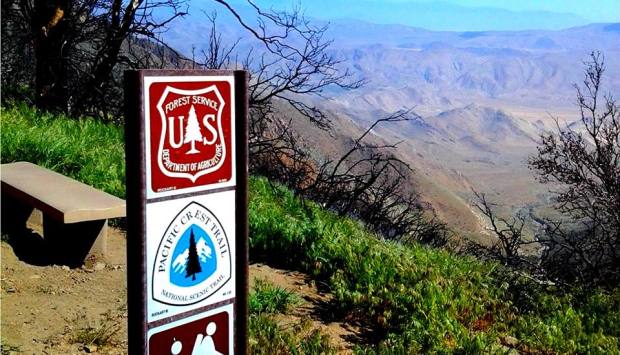 My familiar green backpack leaned up against the metal chairs outside of Starbucks last Friday around 7:00am.  We were waiting for our ride, off to a new adventure, again. That pack has gained a few things since going on the Camino de Santiago last September, specifically a blue mummy bag which made it on this trip,  and then a camping knife and my new tent that arrived around Noon, later that day so I didn’t get to use then on this trip.

Stephen arrived in his FJ Cruiser loaded down with camping gear and …. well, my mountain bike crush. He pulled up 5 minutes early after a rough previous day because of some startling and horrific news (a whole other rant in itself) and was setting out that weekend battling not only with nature, but with some of life’s own little difficulties. Regardless, we set out to meet with the crew. We were headed out to meet up with the Yuma Outdoor Adventures, what I like to call a small family of wonderful people in Yuma, Arizona.  They’d planned the trip to meet up with our Pacific Crest Trail hiker friends Alan and Nicole who had set out the weekend before. We were sad to see our fellow hikers leave Yuma, but they are moving on to much bigger adventures in life.

I’d never been to Mt Laguna. I just started reading Wild by Cheryl Strayed, and was excited to set foot on the same Pacific Crest trail that not only Cheryl Strayed crossed, but my friend Billy who hiked it around the time I was doing the Camino de Santiago last year, along with countless other nomads and trail blazers. You don’t climb a mountain, or two, or three or hike 2600 miles, without a reason. Whether it be a solid reason, a spiritual reason or otherwise. The PCT Is dangerous, and a physical and mental test to the extremes. There is the added excitement of mingling with wildlife on its own terms and of course the ever-exciting game of playing with water availability, one of the body’s most basic and crucial needs. Maybe if it didn’t flow so freely out of all the faucets people would begin to pay a bit more attention to how precious it is.  I imagine on the hike, hikers gain an entirely new respect for water, showers even! Its not the Disneyland of long hikes, as I sometimes referred to the Camino de Santiago, where a warm shower await us at each new albergue and often pre-planned “pilgrim’s menus” with a glass of wine were pre-prepared in each new town, complete with a recent influx of tourist attractions along the way.

Yet the spirit of hiking and hikers was the same amongst the two. I felt like I was right back in that world, I wanted to be in that world. Hike, eat, sleep, hike, eat sleep. People took on trail names, and although many hikers had more than enough space to hike solo, they would find each other at the same spot to camp out at night, they made friends. There was very little passing on the trail, which was not the case on the Camino de Santiago. The PCT is dealing with Mother Nature, instead of small towns and tourists. There are no nifty water spigots every 5 miles, and in fact many hiker’s can rely solely on the kindness of people who bring out jugs of water for the hikers. Granted, I am not underestimating the difficulty of the Camino de Santiago, it pained both my brother and I as you can see here.

Stephen and I met up with the group around 10:00am Friday, just in time to find Alan and Nicole and Bryon, Mike and his wife at the campsite at Mt Laguna, staking out two large campspots for our 20 some friends who were to show up throughout the day. I drug my pack out of the FJ Cruiser and Stephen handed me his one-person tent, that I was to borrow, because of course mine were arriving in Arizona about when I arrived at Mt. Laguna. I had ordered a 50% off tent, jacket, and new knife (with a flint stick on the back) from TheClymb (An update on them will surely soon follow!) It was the first tent I would ever attempt to set up on myself (shhh, don’t tell anyone I told you that, but as mentioned, we stayed in albergue’s throughout the entire Camino hike, and boys have always been all to eager to set up the tents themselves.) I needed a little help, but the tent was a success, even if I froze in it that night. 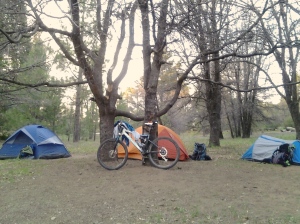 Of course the mountain bike came out not long after the few who were there got situated in their places. Everyone set up quickly to get the best spot on the campsite. Mountain biking and I have always had an odd relationship. I love biking, a lot. Its also easy to drop a lot of money on nice gear for sports you want to get into, and I’ve done a bit of that for my Cannondale road bike.  I’ve always figured that the second I get onto a mountain-bike I’m going to love it, the exhileration, the danger, the things I love about most things I do, and I’ll probably hurt myself, and it will probably be addicting. I have plenty of friends who rave about it. For my own sake, wallet and body wise, I’ve avoided it. Of course then Stephen comes along with the most amazing mountain bike I’ve ever sat. It was like the cadillac of bikes, on rocks. And of course its a Cannondale. Perhaps I was more shocked (pun intended) than most coming from a road bike, which has no suspension.

I wasn’t going to get on the bike. But there it was, leaning against the tree. Stephen’s ride awaited him the following day, a much needed ride. I wanted to ride too, of course I wanted to ride. As I sat at the bench, staring at the bike, there were kids going up and down the road along the campsite as if the small hill was  struggle. The bikes were rickity, one was a cruiser and who knows what the other was, but the kid was having fun on it. For the life of me I couldn’t figure out why they were working so hard to get up a small hill, which looked nearly flat. So there I went, I hopped on the bike to see what the fuss was. I glided down the road, came back up… went back down, and went up one more time to the end to make sure I wasn’t missing anything. Nope, no idea why they seemed to think it was a struggle. And since I was already at the top again, I figured I’d go back down the road, and turn onto the trail road. The bike flew over the packed dirt as if there were no rocks. I went up and down the slopes and cracks and rocks of the trail, over roots and picked up speed as if I wasn’t cruising above 5,000 some feet. I knew I’d love it, my hair fluttered along behind me and I had a grin wrapped from ear to ear. Thats the sort of excitement bikes give me.

For lunch we all wandered up  to the Pine House Cafe so Nicole and Alan could get some real burgers and beer in their bellies after a week’s worth of solid hiking. I recommend the Veggie Burger… if you ever make it there. The Veggie Burgers were so popular they ran out after our last 2 orders of them! They are also the best I’ve had since I stopped eating meat. I remember very vividly wishing my dog was there in that one-person tent that night, I was curled up in the fetal position all night with the mummy bag up over my head, which I’ve never done before. Apparently most other single-campers in the group that night felt the same way. If we had been smart, or less shy, we’d have all shared a tent!

Walking Behind The Happy Nomad

It was a late start on Saturday for Alan and Nicole’s return to the trail. Everyone was slow to get their breakfast going and pack their tents and bags to set out. Only a few of us planned to hike through the day with them, many of the others had to head back home. The trail was gorgeous, with large valleys stretching out before us, and some great drop-offs on down below our feet. It was certainly a trail I had to pay close attention to as I walked along. The sun came out quickly I stripped off the layers of clothes I’d piled on the night before, which later led to a terrible peeling sunburn.

I felt just like I was back on the Camino again, I was reminiscing. The group kept an impressive pace, something that might have given Kent and I a run for our money on the Camino, and we were known as the fast ones. And Alan and Nicoles packs are heavier! For a lot of it, I got to walk  walk behind Alan and his little smiley face on his brand new backpack. That alone is enough to keep you going with a little more bounce in your step. But, I had the advantage for this day’s 14 mile trek, all I had was lunch and 3 Liters of water in my day pack bag. I leaped around on light feet most of the day, trotting and skipping along, trail running in parts. And then at 2:00pm we knew it was time to head back if we were going to make it back to town before dark. Not knowing when we’ll meet up again, even though we fully plan to hike more stretches of the PCT with them, we said sad our goodbyes.

Even on the way back with sore legs I trail-ran a piece and got back to Mt Laguna with energy, ready for … another veggie burger. Though fully refreshed, invigorated and exhausted, 14 miles after the day had begun the three of us arrived back at the vehicles. Bryon had kept the pace pretty much the same coming back as we had setting out, this is the Bryon who can hike up Telegraph Pass in Yuma at least 3-4 times in a row. I envy these guys, I’ll get there.

We sat back at the Pine House and I noticed the next bunch of weary travelers resting in their wooden chairs. Also the same amongst these long-thru hikers and the Peregrinos is what I call the Zombie Walk. I remember that walk well. In Spain, while resting in the small Spanish towns, and even the larger ones like Pamplona, it was easy to spot (even the well-showered) the Peregrino. There was a sort of ambled hobble to their walk, it comes about in a sort of stiff-legged, pained and tilted movement that nearly every hiker, laden down with a 20+ lb pack and having hiked 20+ miles acquires. Blisters happen, and legs ache.

Me, Bryon and Mike

Bryon was nice enough to give me a lift back to town that night, jammin’ out to classic rock, we watched the temperate go from low 70’s up to 87 just from dropping down out of those hills into the valley. Back to the desert, and back to work.

Apparently only 50% or so of the people who set out on the PCT finish. Since the 1950’s 2,964 people have registered as having completed the PCT trail and 57 have done it more than once, it is undoubtedly an extreme physical achievement and I myself would love to complete it some day. 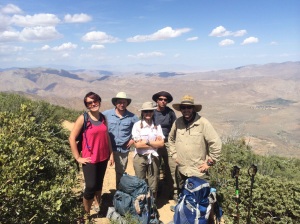 Follow the Happy Nomad’s Journey as they continue on their way!

Hey, if it doesn’t hurt, you didn’t work hard enough. 😉

4 thoughts on “My Run-in with the PCT”