“Tattoos are a right of passage. They’re a marker of bravery, of maturity, of cultural acceptance. The tattoo represents not only a willingness to accept pain – to endure it – but a need to actively embrace it. Because life is painful – beautiful but painful…….”

The bell jingles, the door opens and my nose catches whiffs of sterile fluids. It’s lunchtime and the tattoo artists are cleaning, sharpening, sterilizing their equipment, and setting up their stations.  Long strands of light poured onto the wooden floors. Clutch is droning on in the background with its revolving, methodic beat. The tattoo machines were freshly cleaned and steel parts steamed from inside packaged, sterile bags. There is a couch in the main room, a cold, black leather couch upon which I place my things beside carefully beside me. I am early. I sat for a few minutes on the the couch before Rob’s 6’5 figure came over and hovered over me. He asked me about my day. My attention is drawn to his black combat boots and his horror movie character tattoos peep out at me from his arms. He stares down  from behind thick black-rimmed glasses. He gives me a bear hug so big he pops my back and pulls me off the floor. He is a gentle giant, who inflicts requested pain, he is an artist. Content after the bear hug, we can start. 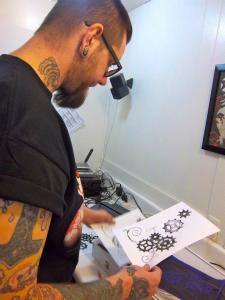 Snuggled down in a massage-chair, I straddle a black metal bar, resting my elbows on the padded cushions of the chair in front of me. Hands clasped, back arched in a sort of prayer position, my body became the ample canvas, a tightly stretched calf hide ready for tanning. My crumpled frame felt so insignificant, I felt so small. The machine buzzed, the familiar needle injected my skin with black ink. Fifteen minutes went by, I looked down, and I started to feel sick.

I look back up, glance around the parlor at the posters, a small plaque hanging under the Godzila figurines that says, “Be Brave, Would You?”

I’d never felt this way during a tattoo or piercings before. It was like heat exhaustion back home in the desert, I was dizzy. It’s okay, I’ll get over it. Pain is just weakness leaving the body, I think to myself and look over at the kid in the Army, his chest was being tattooed, he lay there quietly with headphones on. The chest is a very painful place to have tattooed. His arms were stretched back behind his head casually and his feet dangled and bounced to the beat of the song in his headphones. I stared at the red walls, the available piercings and jewelry and the dark men walking around the shop like the tree creatures from Tolkien’s Middle Earth, their long limbs moving to and fro. It’s a safe place. My attention focuses on the tattoo machine humming in the background, intermingled with the low, raspy voice of the singer from Clutch. I close my eyes for a moment.

When I opened them, everything turned to slow motion. I became dizzy and longed for my water bottle. Too far away. I glance back at Rob, then at the other tattoo artist who came over to talk to him.

My eyes shutter open, and I sit up, I’m staring at three large men, all grasping on to me, Rob has my shoulders from behind, his massive paws bigger than my shoulders, the other two men in front of me, “Are you Okay?” they asked intently. Six bright eyes stared intently at me. I smiled, as if nothing had happened, a dorky smile, no big deal. “I’m okay, why?”

“Good… cuz you just passed out, when was the last time you ate?” The owner of the shop, who had tattoos on his face asked. “Around noon” I said, I had purposefully eaten a rather hearty breakfast and lunch that morning for just that reason. For my last tattoo I had been a bit faint throughout it because I hadn’t eaten much. That was a four hour tattoo, with no problem.

I remembered shaking from being cold and falling forward, being already only in an unclasped bra hanging over my shoulders and a large scarf across my chest because the tattoo took up most of my back. I squeezed it up against me, but there just wasn’t enough scarf to make me feel warm. I hoped I hadn’t fallen out of my small bits of covering. I was mostly shaking from being cold. I always feel cold while getting tattoos.

I felt smaller and smaller as I sat there. “Eat this” one man said and handed me a horse pill-sized, pastel orange, glucose pill. It taste like fake sugar, powdery and pasty.

“Happens all the time. Your body’s glucose levels can drop very quickly while being tattooed, causing you to pass out.”

The other tattoo artist told me he passed out for his very first tattoo, his body was covered in tattoos and piercings, every bit of free skin I could see was covered, including his chin!  It made me feel better. Happens often enough that they keep tablets on hand, anyway.

“Which kind of M&M’s are your favorite?” Rob asked. “I don’t really have a favorite.” He emptied a handful of them into my sweaty palms. Passing out caused me to turn pale and sweat, apparently.  I nibbled on my M&Ms and sipped on a water bottle that they handed me and then he started again. The drilling of needles in the soft flesh of my lower back ensued. Being one of the most sensitive areas, the tender bones that frame the top part of the pelvic bone rattled and tensed. It shook my bones and caught me a little off-guard each time the needle pressed into my skin. The closer the machine came to my spine the more rattling I felt all the way up my spine,  I cringed.

The job of a tattoo artist is to inflict pain, to jab needles into a human’s flesh for extended periods of time. He is creating a work of art, his art, and his signature, in the flesh of another human being. That pain is what keeps some people going back for more.  I’ve gone back to do it three times now. They say tattoos are addicting, probably because after the first one, which is hopefully in a semi generic, less painful area, you realize that it didn’t hurt as bad as you thought, and you come to expect the pain that comes. Usually it seems, a year is long enough to forget the pain and having seen lots of other designs you now want, you are ready for another.

I can honestly say, this sort of pain, on my lower back, along the muscle that cushions each side of the spine, and along crucial nerves, is the worst pain I’ve felt, ever. It definitely wasn’t a beginner’s tattoo and I am glad it wasn’t my first. Sitting there while the needle dug over and over into the already raw-rubbed skin from alcohol and rough brown paper-towel wiping, dabbing away ink and blood, my eyes started to glaze over. My fingers dug into the black cushion of the chair. I wanted to bite the roll of paper towel sitting in front of me. I clenched my teeth together.

“Be Brave, Would You?”  I stared wide eyed at the sign again. My mind tried to wander to happy things, happy thoughts, other places. I thought about riding my horse. While trying to focus on something else, my brain couldn’t concentrate on trying to alleviate the pain on my back and I found the best method to be thinking of nothing, and staring blankly ahead, essentially numbing myself to the world and allowing my body to concentrate on creating its own pain medication. It was a pain meditation.

BBzzzzzzz. ZZZZZZzzzzzzz, it scratched some more. For at least three hours it scratched and buzzed and burned. Rob’s large hand was over my entire left hip, pulling the skin, stretching it, sketching on it, tugging at it. It was the only soothing thing in my life at that moment, the scarf didn’t do much good. My right side was tight and tensing to brace for the pain on the left, muscles and nerves started to twitch and each needle that got closer to a muscle in my back twitched.

“Alright, you’re done,” He said. Some three hours had gone by, I’m not really sure how many. Luckily time actually goes faster than usual in that chair. And as soon as the needle stops, the pain stops. Its not the sort of lingering tingly pain that stays after a paper cut. I sat there, dumbfounded a moment before standing up to look at the tattoo. My body was cold.  I loved my new artwork. I clutched my scarf to my chest and stared back in the mirror. It was gorgeous. Viewing it is always instant gratification for the three-hour pain ceremony. I semi-drowsily left the tattoo shop into the dim, cool dawn evening.

“My body is my journal, and my tattoos are my story.”

Robzilla, Me and other tall guy at the Reverend Horton Heat show in Fort Collins for my Birthday