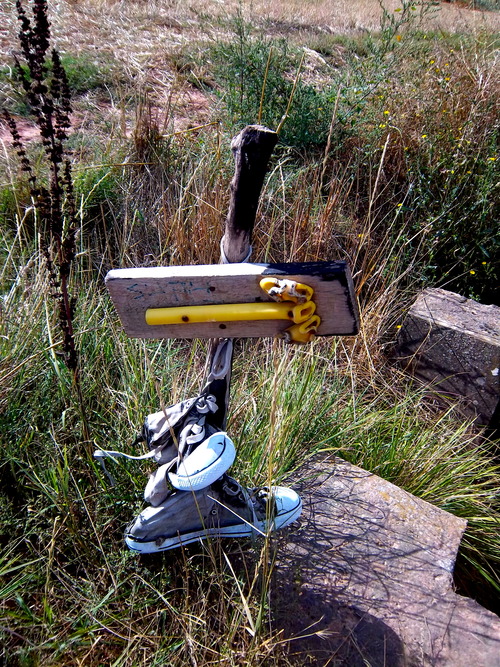 I am finally sitting down after what feels like a 20 mile jog today. Leaving in the dark again, around 6:45am this morning, Kent and I set out to make the city 29 some km away before they ran out of rooms. It’s somehow becoming more and more of an issue that the municipal albergues are full before 1pm! Our rush doesn’t allow for any time to visit towns, see historical sites or even to have a decent lunch. Since the movie The Way came out, there has been an explosion of people hiking the Camino, and I am starting to notice the effects. 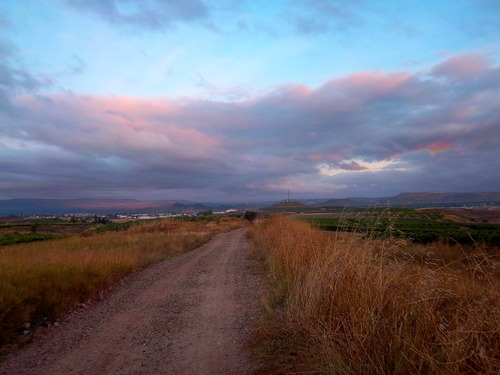 tarting off slow this morning, I warmed my legs up in the dark, during a misty sunrise and Kent stayed at my pace. I realized that if I walk too quickly, l over-strain my muscles and hurt myself early in the day. Then it hurts the rest of the day, specifically on the backs of my thighs.

I was told once; don’t walk any faster or slower than your own speed, and its good advice.

I do walk fast, but Kent’s longer legs can just keep a stride that I can’t comfortably keep up with! The sunrise was phenomenal, the landscape was epic and we arrived at Santo Domingo de Caldeza at around 1pm and tried to check into the Cistercian Monastery albergue, which we sadly found to be full. The one down the street was very modern and huge, and well organized with plenty of availability.

Regardless, we had felt a bit of a need to rush the last 8 km into Santo Domingo from Ciruna. My legs were aching after 20 km, but the only albergue in that town was 13 euro, and the town was quite boring so we pressed on. We can’t do any more 10+ euro albergues, and have to stick to the Refugios, the state-run donation based places. The road into Santo Domingo is a long, nearly straight dirt road and I had picked up a slight swagger walk. My secret to finishing strong on these 25km + days is music, I put in my favorite, Jon Ali Summer Playlist and picked up the spring in my step to get back into my quick stride. I soared past groups of people who were struggling into town. My lied to myself about the pain in my legs, they hurt just as badly. Perhaps I stopped feeling my legs from the knee down about halfway to our destination, but we couldn’t afford for a taxi to another town, or for a hotel or hostel, if the

Albergues were full. I’m quite sure that was the quickest 8km I’ve ever done, and that’s with my 15 some pound bag. I haven’t weighed it in awhile, so who knows what I’m trucking around.

After staying in Ventosa, the town that was 9km short of Nájera, where everyone else in our ‘group’pushed on to the day before, we were thus 9km behind them, trying to get to the same place today. Not only did we make it, we beat many of them. Probably of course due to our quick lunch break and mad speed. But along the Way we caught up to some of the people who started the same way we did in St Jean last Tuesday, it was nice to know that we were back on track with them and most of us ended up in the same albergue. We enjoyed seeing the familiar faces

, but many of the people we started with have also already stopped. Some people plan to only walk for a week, some people plan to get in as much as possible before a certain deadline, some people walk as far as they physically are able to, and some don’t make it up the first hill on the first day. Others jump in at the last 100km, because apparently that will also get you the Compostela. Which I think seems silly to any of us that plan to walk all the way across Spain from St. Jean Pied de Port, France.