During our CouchSurfing and mitfahrgelegenheit adventures in the northernmost border of Germany we passed through the small village of Breklum. The origins of this town can be traced back to the 4300–2300  BC and the church itself was built in 1200.  It was the church in which my great great great great relatives (I haven’t exactly counted quite how great) were married. Johannes and Friedricka Behrendsen were enumerated into the United States in 1910 and I didn’t learn of their existence, or of that fact that I had great German relatives until long after I coincidentally learned to speak German. In the small German cemetery in Breklum I was in search of previous generations of Behrendsens.  The small cemetery held a surprising lot of people with the last names I was searching for, and I never found any exact names from my enumeration document copy.

I really wanted to see the inside of the old church.  I meandered around the many well-kept graves in the cemetery and tried to ask a few of the people tending to  graves by the church if the church had specific times it was open. One kind woman who spoke a closer version of the “Hochdeutsch” (high German) that I understand said she I might have luck if I asked the pastor. She gladly pointed me in the direction of the the church office just down the street.

I was greeted by a small ranch style German home with a sign on the door that said the office was only open on Tuesday, Thursday and Friday. It was of course, Wednesday.

Germany runs on very strict and sometimes random time schedules. While visiting Germany’s northern Island of Sylt (yes, Germany has islands!)  we encountered the same thing. From Sylt were a number of ferry rides and we had hoped  to pop over to the Danish island just to say that we had been in Denmark. As seems to often be my case while visiting Germany,  the ferry runs all year, except the week that I am there.

Back in Breklum, there was no one at the pastor’s office.  I started to wander across the street to the other side of the cemetery and then a woman drove up to the office. I  snuck back over towards the pastor’s house again and the woman smiled at me. Although I was half expecting an answer in plattdeutsch, I asked if she knew when the church would be open. “Oh!  It should be already!” she said, in Hochdeutsch.

I’m not very accustomed to such friendliness in Germany and started to tell the woman why I was there, and that I was trying to find any sort of information on my ancestors, knowing that the church records should keep track of all of marriages and events in the church.  “Ahhhh hah. Und du bist Amerikanerin, ja?” and said with a glint in her eye. “Ah hah. And your’re American right?”  She pauses for a moment and asks if I could come back tomorrow. I apologized and told her I was staying in another town a ways away and had just taken the bus up for the day to find the church. “Moment. ich hab was für dich.” “Hang on, I’ve got somethin’ for you.” She ran into the house, and returned with a key to the church office, nestled up to the left side of her home.

She rummaged around the office and a desk full of stacks and stacks of paperwork and files. Eventually,  she scribbled something on a piece of paper and hands it to me.  “Herr Tams” it read, with a phone number.  Then she said,

“…and the church. Well, should I give you the key?”

My eyes grew wide. She didn’t really wait for an answer before handing me some ancient 2 lb key with a circle enclosing a cross at the top. She smiled at the look on my face.

Talk about guarding yourself with the power of God!  It certainly was a key with a presence. Medieval key in hand, I thanked her and giddily walked back to find adventurer explorer buddy, Sarah still enjoying the church yard. She greeted me with the same expression I had had, after seeing  large key pressed into my hand. I had disappeared about 30 minutes earlier in search of the key or any information.  I’d caught the attention of the few of the local people wandering around the sleepy little town that day,  it was gorgeous out and everyone wanted to be outside. Being just the beginning of Spring as it was, it was probably the nicest day since last October. People were busy  raking and fussing over grave plots like gardens.

One woman whom I had asked about getting into the church earlier had heard my accent in German knew I was foreign of some sort. She watched me stroll back up to the church giggling with the massive church key in hand. I popped the 2lb key in the door, turned with a massive crank and heard the gears and ancient locks twirling and twisting inside, winding as I turned. A hard downward yank on the huge handle and … the door didn’t open. After pushing prodding and pulling a few minutes, convinced it wasn’t really going to work, I got the door open, and unlatched the magic that was inside the ancient church. The entryway was surrounded by a circle room with cozy, wooden walls and held together by medieval wood.

Sarah was giggling at my excitement at being in the church where my great great grandparents were married, and at the fact that we had the key to this ancient church with no one around. We had the entire church to ourselves. Even for those who don’t believe in God, I think churches; especially medieval ones emit a great power and presence. Sarah grabbed her book and started reading in one of the church pews as I fiddled around waiting for the Herr Tams to show up, whom I’ d called after successfully opening the church. I told him I had a few papers with family history, and if he was interested and had time maybe we could meet. The pastor’s wife said he was interested in researching such things. Little did I expect a bright blue eyed shaky little man with the kindest face.  He showed up and although couldn’t help me with the family information, he explained a little about the church itself and told us about a few families who had come to Breklum trying to find their family ties.

We decided to ask about plattdeutsch as well while we were in the small town. Asking around about it in previous towns, I was told that it was most often spoken in the smaller cities of Northern Germany. Herr Tams said  he only speaks hochdeutsch with his children. Some people in the area can’t even speak hochdeutsch. I guess I should clarify; there are various dialects in and around germany of german. Plattdeutsch originated in northern Germany through the trade routes between all the countries on the north and Baltic sea. It evolved and spread because they had to communicate with other docks in order to trade and barter. The language also didn’t go through the High German Consonant Shift (Zweite Lautverschiebung) and is what many of the mennonite colonies in the United States still speak. It’s more similar to the Pennsylvania Dutch.

Luckily I was able to hear some of it as we were wandering around the graveyard earlier and Herr Tams spoke some for us on the way back to catch our train in Bredstedt. The next closest town with a train station Breklum isn’t big enough for its own train station. He asked where we were headed after the church and kindly offered to drive us. It was really only a 4 minute drive, but had taken us a half an hour walk earlier Funny how that works. Herr Tams didn’t speak a word of english, and it seemed that much of the rest of the town didn’t either.

From the train out of Bredstedt we reached a small northern German town called Sankt Peter-Ording in the state of Schleswig-Holstein, famous famous  for its baths and its sulfur spring.  There, our next CouchSurfing host met us at the train station.

We loaded up our over-sized backpacks into her little trunk and made our way through the dunes, the marshes and the countryside to her house. Sylvia was a young school teacher who lives alone out in the countryside. She rented a part of a barn house that had been converted into her apartment. Just an old barnhouse that is now a two family building, and gorgeous. Its was amazingly well done, and Sarah and I were her first CouchSurfers! Although she had stayed many places on her own adventures around the world, she hadnt yet opened up her home to incoming visitors. I was surprised to hear that she had a love for the Native American culture and  way of life, but was yet to ever visit the US. 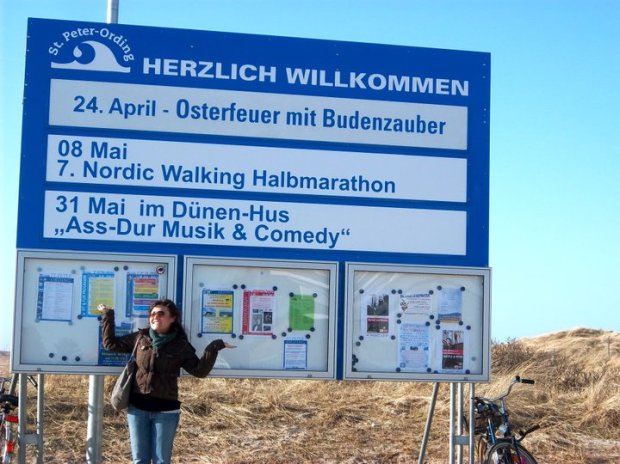 Her ocean home was guarded by dreamcatchers and native-american designs.  Those were appropriately accented with drawings from her kids at the elementary school. It was a light and open home with oranges and yellows decorated with plants and soft yellow wood.

Staying there that night was peaceful: the ocean in the background, the old barn. There wasn’t a sound in the entire barnhouse except the tapping of my computer keys and the occasional creek of the wooden barnhouse structure. The Germans of the North Sea absolutely move to a different rhythm and rhyme than the rest of Germany.