From the passenger seat I watched the front right tire of the jeep roll up, and twist over a big rock in the trail. In the shiny, black metal I could see the reflected red hued mountains in the distance along the desert trail, wrapped up in the endless, clear blue sky above.  Our friends followed along in an older little vehicle, their windows down, in awe at the Jeep crawling over the rocks, flexing and bending over the washed out parts of the road. It would go anywhere. It also made a big spectacle of everything it went over, a nimble black widow scampering across its web on long, nimble legs. Their little vehicle, sporting brand new little tires lightly rolled right over the same obstacle with much less of a show. The wind whistled between the cactus spines along the trail before us.

We were venturing out to one of my favorite desert hide-aways, to a spot I’ve been going to since High School.  A place where there is no cell-service, no toilets, but water did run at one time.

A school trip had taken my sophomore class out to the Castle Dome Mines Museum and then out to one of the nearby mines. Our gutsy bus-driver maneuvered the school bus as if it had 4×4, right up to the side of the mine before dumping out a group of some 25 honors history class students into the desert. It was a short lived tradition for that teacher, an exciting adventure for each year’s class. One year somebody decided to scare one of the girls deep down inside of the mine, sending her running back up along the rocky and finely dusted road out. She tripped, and hurt herself and the trip was no more.

The opening to mine was so wide a small 4×4 vehicle would fit right down into it all the way to the main bottom floor where the cave split off in three directions. Only one actually goes much further and deeper into the mine where many bats live. As the cave deepens, the air thickens and smells of urine soaked bat feces. That mine is now barred off due to White-Nosed Bat Syndrome.

The following year I got my driver’s license and was able to take friends out to see the mine and explore the surrounding desert. Each time en route to the big mine,  I would pass a big wooden sign that said, “Big Eye Mine – 15 miles,” with an arrow off to the right. Eventually I gathered a few friends in other off-road vehicles and decided to check it out one day. The trail took nearly 2 hours and I remember constantly thinking I might have gone the wrong direction somewhere. There are two tricky spots on the route, which include sharp rock climbs, that a regular car would never manage. After a rain one year in 2005 I managed to get our Jeep Cherokee stuck on a rock in the first of the difficult washes.  When the heavy rains come, the desert morphs into a new being, the roads change and what may not have been a difficult section, because of flash flooding in the desert, would become hard to maneuver. But the desert is always watching over my desert adventures, guiding me safely along its paths.

The first time I made it there in 2004, (my first signature from that trip can still be found and dated with all my friends in one of the guest books), there was no mailbox out front, and the plaque with a small history of the cabin wasn’t yet put in place. Upon later research, I learned that the building was used to house the miners back when the mine was active, beginning around 1910. The district as a whole was apparently quite productive between 1863 and 1959, and as is clear from the Mine Museum along the way, Castle Dome City was a happening town,”which stood larger than Yuma in 1878,” in the Wild West days. Gold, silver, copper, lead and zinc were mined there. The little cart track that delves into the entrance of the mine can still be seen. You can still continue along the trail that goes beside the cabin all the way up to the mine. Unfortunately though, while you can walk over to the mine (continuing along the road that runs beside the cabin), the Refuge now asks that visitors stay out of the mine itself (again due to White-Nosed Bat Syndrome).

The cabin is well maintained despite its remote location. In fact, it hasn’t changed or aged at all since I first found it in 2004. People seem to respect it, and take care of it when they visit. Or perhaps the long road to get to it keeps anybody away who has bad intentions. The same two cots have remained inside the cabin. The back door, which opens into what used to be a kitchen with a stove has open holes in it. They were very noticeable on this last weekend’s trip while I slept in that room, so we draped jackets over the holes. One of these days I’d like to fix that door. 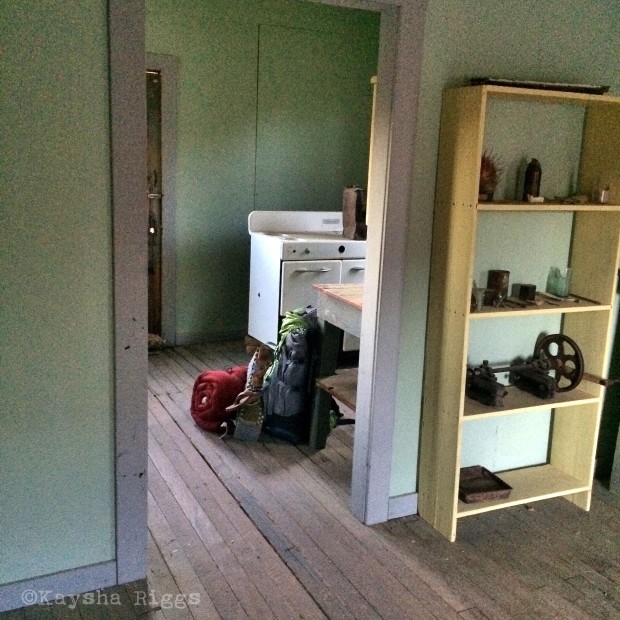 The roof keeps out the water, as it should. On one trip, as we followed the trail out to the cabin, clouds took over the sky and it began to rain. We reached the cabin and just as the boys we were with took a second trip down to the vehicles to grab the rest of the gear, lightning spread across the sky in intricate  spider web patterns. Each crack of lightning illuminated the desert in front of us as if it were daylight, and then disappear, our eyes still in shock from the sudden light. It would turn dark again, our eyes unable to immediately re-focus causing short moments of blindness. This went on for hours as the desert soaked up the rainstorm into the night.

The next morning our group slept in so late from a sleepless warm night, we packed up to leave in some 100+ degrees, quickly using up our water supply while guzzling down cup-fulls trying to carry our over-sized gear back down to the vehicles. I had become dizzy carrying down gear on the 3/4 mile trek down from the cabin. In that sort of windless heat, if one of us had gotten a flat tire, run out of gas, or gotten stuck, it would have been too hot to be outside in the sun fixing the problem until sundown. Heat Stroke is a serious problem in our desert, and not something to be toyed with, but we were just silly kids, learned our lesson and made it home okay that day.

The trip this weekend was mostly uneventful, and I was happy to finally drive the new Wrangler over some rocks. I enjoy the trail to get there, I think, more than anything. The majestic Castle Dome watches over us from a distance for most of the journey. I have a new respect for that peak after climbing to the top of it earlier this winter. There is also, what I call “Turtle Rock,” in sight for the last half of the drive. The trail weaves through valleys and over small plateaus, and takes us through stretches of big Saguaro cactus. I consider Saguaros to be the majestic cactus of the desert. The low-down dirtiest of the Southwestern cactus are the Cholla, which tenaciously dig into tires, skin, hiking shoes, fur and dog’s paws without mercy. The cactus can grow to a human’s height if it’s lucky, but then the small round arms of it fall of and catch the wind, blowing away from the original cactus.

They pile into tricky little groups and catch you off-guard. They congregate at the bottom of caves, creating a floor seemingly fluffy white cotton (giving them the name “Teddy Bear Cactus.” But these fuzzy gatherings will, as my childhood dog Molly found out,  latch into skin and its barbed spines will expand.

On one trip out to the cabin with a group of foreign exchange students we discovered a long hole through one of the hills. It’s a strange hole, you will still see it off to the left if you take the trail. The exchange students wanted to go explore this precarious hole in the hill.  We parked beside a caved-in wooden structure which had shafts still plummeting deep into the earth and dirt cave in on top of it. I wondered how many abandoned shafts were out in the area. They girls picked up speed and ran for the tunnel, excited to get out of the vehicle after the hour long drive from town. The entire trail from leaving Highway 95 to the cabin is some 23 miles, often at a crawling speed.

“It goes all the way through!” One girl squealed, her chance to become one with the desert, a chance to touch a part of the real Wild West loomed ahead. I was behind three girls, with Molly. Not even halfway through and I heard her whimper, already engulfed in the darkness of the tunnel and headed towards the light at the end of it. I touched her, and felt the Cholla latched onto her little body, just as one of the girls squealed and yelled “bats!” and started to run back towards me. One girl from Kazakhstan and two or three from Russia, myself and the dog came piling right back out narrow 5’7 high tunnel.

Molly’s lower body was covered in Cholla. She stood as my friends and I picked hundreds of the little cactus and spines out of her. Excitement for the trip took over her pain as we moved on and she quickly forgot about the event.

I take every chance I get to make it out to the cabin now. I am unsure of its future, hearing rumors that perhaps the Refuge no longer has the means to preserve it the way that it should. If it were to be sold to somebody, would it still be available the way that it is now? I always wonder. That road has a lot of my teen years. It taught me to off-road, and taught me how to over-prepare for hot days in the desert when cell-phone service was not an option. It was one of the first places I’d venture to that didn’t have cell-service, and parents to rescue us were not just a phone call away.

We reached the cabin as the sun made its slow decent below the horizon and hauled up our sleeping bags, camp gear and other doo-dads to set up camp in the cabin. I was happy to show another few friends this second home of mine. We sat at the picnic table in the cold wind outside and prepared our dinners.

I lay in blankets that night, bats screeching outside the window and a bright moonlike soaking the  wooden floorboards of the cabin in a yellow glow. Again and as always, in awe at the peace to be found in the desert. Quiet nights there wake up to peaceful mornings. Often even without the chirp of a bird, it remains almost eerily quiet there in the wintertime, without the deadly heat to take over each day. With temperatures not usually dropping below some 45-50 degrees at night, the Kofa National Wildlife Refuge in the winter time is a comfortable camp.

Now, I prefer life that way sometimes.  It’s nice to disconnect and not be easy reachable by anyone but the people I am with.  I would be incommunicado to the rest of the world until the following afternoon.