September 1, 2016May 11, 2022
I buried my toes in the sand and peered off into the foggy mist that hovered over the Kite Festival in Long Beach, Washington. It was cool, but not cold for an August afternoon. My hair whipped madly against the ocean air that was tickling the show kites every which way. Kite festivals draw an interesting crowd; enthusiasts of the sport who must spend most of their time practicing new moves and jumps. I learned that freestyle kite flying is a professional event as I looked on toward a kite jigging and jiving up and down and side to side in tantric movements to the beat of a remixed dubstep version of the Lion King’s “In the Jungle”.  There were thousands of kites in every direction, little fast trick kites and big hovering 145+feet long monsters that hovered in the sky, hidden behind the fog like ghosts tied to a string. 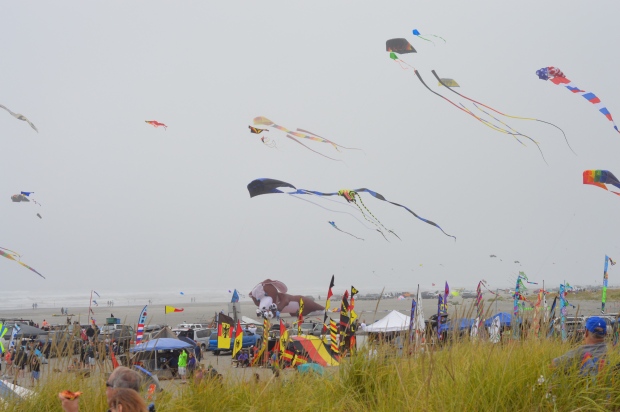 When the tide came in and the temperature dropped, we were reminded of how we didn’t have a place to stay that evening. I had searched hotels along the coast before Brent, Hank and I had left early Saturday morning, with no luck.  We headed out anyway, convinced we’d find something. We had even shoved our tent into the back of the MINI, just in case.

“Surely there is a free spot, at least for a small tent, along one of these beach towns,” we thought.

It is with this mindset that Brent and I often travel, and it hadn’t yet been a problem. But this weekend, numerous events in the coastal towns, as well as 95 degree heat in Seattle had pushed many more people than the already large crowds, westward.
We drove south along the coast, calling hotels as we went, from Long Beach Washington and over the bridge into Astoria and Oregon’s coastal towns of Gearhart and Seaside. It seemed impossible that every single hotel was booked. Every single one. A further internet search during a late night pause for fish and chips said that the next available room (without going down into Portland) was in Longview, Washington, nearly 70 miles away. We booked the room online and showed up late, exhausted, tired and frustrated in Longview.
Keep in mind, Brent and I are from towns where the land is so wide open, your eye can’t see as far as it goes. There is space for everyone to do just about whatever they choose, and they don’t have to do it all at the same time. There are long months for fun, open space, and few fences. The Pacific Northwest is different. Washington has a short few glorious summer months in which everybody goes to do everything, all at the same time, often booking their stays half a year in advance if not more. But our spontaneous adventure to the International Kite Festival had been a must; Brent is a serious kitesman. He even brought his own trick kite along to make use of the sea breeze.

After scoping out a local guide to Longview, we realized we were right beside Mt. St. Helen’s, the still active Washington volcano, that is far less exciting but every bit as daunting as Mt. Rainier. We drove to the top of that, flattened by it’s recent 1980 eruption, and realized dogs weren’t allowed out on the trails there. I left Hank in the car for some quick pictures, and then managed to persuade Brent to go back to the coast. I pulled up another Yelp map of the coast and picked a random hotel as close to the water as possible – in Westport. As soon as we parked at our last minute seaside reservation, our annoyance with driving halfway across Washington again to the coast was forgotten. Hank also quickly forgot how much time he’d just spent in the car. He hates car rides, but the patio was really on the water! In fact, we were on one of the tiniest slivers of land, shoving out into the north Pacific Ocean so far, that I was quite sure I would see a whale outside our window, if I looked hard enough. A strong storm could send our tiny cottage sailing right out to sea. 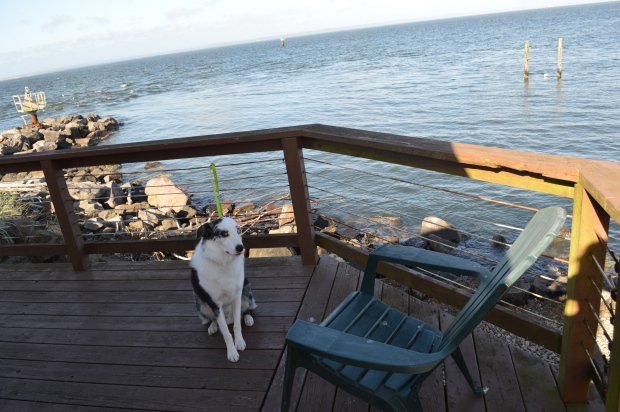 The cottages are called the Harbor Resort motel cottages. I’d apparently reserved a room in the main building, but after inquiring about the cottages when we arrived, the kind man at the desk gave us the key to go “check out”, one of the cottages. We were in love, despite how old the poor “cottage” must have been. Sunday night vacancies are much more likely than Saturday night vacancies, and I’m sure if it had been any newer, we’d have never have been able to afford a beach-front cottage.

I’d absolutely stay there again if I had the chance, all for the location and front row seat to the sea traffic, consisting mostly of fishing boats, fish, porpoises and seals. The little tiny homes, which I heard referred to as “fisherman’s cottages” could use some love,  but we were in it for the adventure and closeness to the sea, and  on a budget. After watching the sunset we trekked over to The Knotty Pine for some fish, chips, brews and pool and called it a night.
The next morning with the sliding door open, I could hear the seagulls and ships outside as I brewed coffee (rooms come with a small coffee pot and coffee). The smell of the morning’s caught fish lingered heavily in the air.  I sipped my coffee on the patio and listened to the foghorn and seals by the jetty around the corner.  It was Monday, and it seemed that the fishing town resumed to a normal routine after the tourists and Sunday wanderers dissipated from the weekend. Sunday, unbeknownst to us, there had been some sort of Farmer’s Market and drove right to the street where the vendors were packing up their goods of all sorts. But in the Blue Buoy Restaurant, it was business as usual and we joined the local fisherman for breakfast by the dock and watched the fishermen outside unload large cases of tuna from a boat. They were all large, gruff men in rubber boots, many with similar short, round beards. 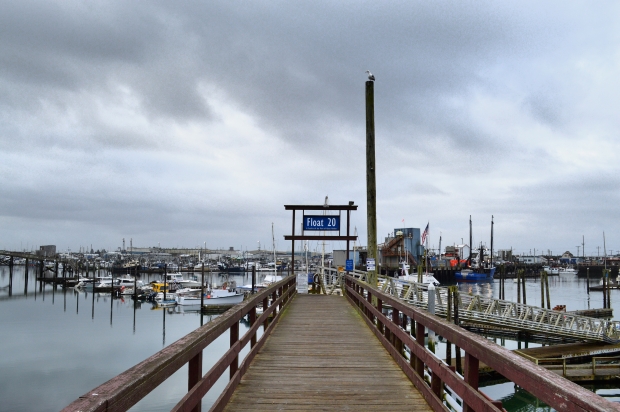 By the time we’d finished eating I was warmed up and anxious to get out to the ocean to explore. We kicked off our shoes at the beach and spent the rest of the afternoon barefoot and started our trek along 2.5 miles of coastline towards the Gray’s Harbor Lighthouse. We spent hours searching for shells and watching Hank half-chase after the seagulls. I was excited to find my first sand dollar, and then realized how many there were along that beach. I wanted them all, but resigned to only taking three, plus shells. I hadn’t brought any bags, and had no pockets in my sweater, so I filled Brent’s coat pockets with sand and things of the sea. We listened to the seals in the distance and the droning foghorn lullaby that served as the soundtrack to our trip. Before long, we too moved to the beat of that horn. Life is slower in here. In the distance, a large shape appeared at the water’s edge and. Due to the morning fog, it had remained hidden until we were right upon it, and only became eerier as we neared it.

We learned later that the boat had gone aground a day or so prior to us finding it. An article online describes how the tides were ripping pieces of the boat apart, and the chances of a repair and being towed back out to the sea and into the dock became nonexistent. I can only imagine the stories the fisherman had from that night at sea. He’d apparently spent all the money he had to buy the boat, only to let her be swept back out to sea.

When we returned to Seattle that evening, we realized that we had brought much more of the ocean back with us than we’d planned, in floor mats of the MINI. And even if just for a day or so, the foghorn drummed on in my mind, setting the pace for the coming week.