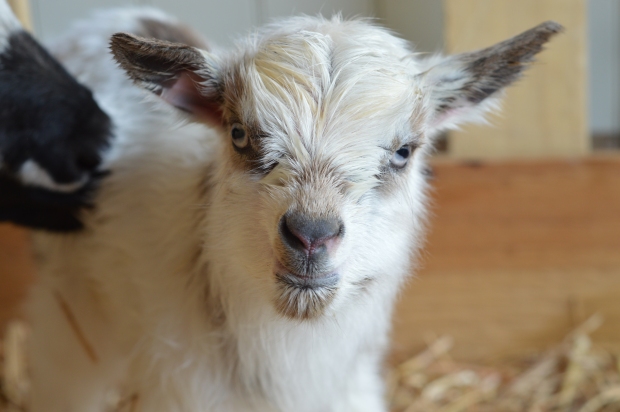 In order to produce milk, a dairy goat must give birth. She will continue to produce milk after the kid is gone as long as she is still milked daily. I bought Nilah, my Nigerian Dwarf Goat at around 10 months old, and it would finally be her first time kidding. It was my first time, too.

At around three months pregnant one of her teats had become much larger than the other and I thought it would be a good idea to do a pregnancy check before I assumed it was just because she was beginning fill up her udder. It also just then occurred to me (it’s my first time with dairy goats!) that I should have her tested for CAE and purchased a pregnancy test kit from BioPryn.

The kit came with 18-gauge needles, which seemed freakishly large for my tiny dwarf goat, so I bought some 22-gauge needles from the nearby feed store and drew the blood with one of those. Goat forums mentioned that it would take forever to draw blood with that sized needle, but I found that not to be the case. With a quick pregnancy confirmation and a negative on the CAE from BioPryn, I was able to rest assured that the enlarged teat was indeed due to pregnancy.

Two weeks before her earliest potential due date I gave her a bath, trimmed her hooves and a gave her a full haircut –  shaving her both for the oncoming Arizona heat and cleanliness during birth with my new Wahl clippers. I was really glad I did! Aside from the goop that gathered on her tail, which I also eventually trimmed off because it wouldn’t scrub out, she remained fairly clean after giving birth. I felt fortunate that the weather here is warm enough to give her a bath after kidding.

She had been in with the buck for about two and a half weeks in November, so I wasn’t able to prepare for an exact 140 day due date. I just planned to keep a close eye on her for all the signs. At the earliest possible due date, 140 days past the first day I dropped her off with the breeder, she began to have the distant look in her eye, she was visibly uncomfortable. After a few days of that I moved her to the makeshift “kidding stall,” enclosed with old pallets and bedded with straw. It was closer to the house than her regular pen so I could check on her without leaving the house and/or hear her. She had also become much more friendly and would occasionally rest her head on my leg while I scratched her cheek. She’s not exactly a mean goat, but she certainly isn’t affectionate so the change was noticeable.

She had me fooled for that entire week. Goats are apparently notorious for waiting until some freak winter storm and/or the worst possible time for their caregivers, to kid. I watched birthing videos, read all the blogs and articles and felt extremely prepared for my goat to give birth, and to step in to play my role as a goat Doula if needed.  I followed the detailed recommendations of Fiasco Farm religiously and read and re-read their notes on preparation and things to have on hand.

Nilah, a few months before due date

She had began pawing in the straw and getting up and laying back down. She was restless and uncomfortable and I thought that every day for that week she was going to kid at any minute. She didn’t even show any discharge until the night she delivered!

My prepared kidding kit sat by the back door. At the advice of the previously mentioned blogs, I had adjusted the kit accordingly, prepared with things I purchased through Amazon* (*disclosure note included below). Most of them were nonexistent at the nearby feed/livestock stores.

I checked on her diligently every two hours throughout every night, so sure it was about to begin. Of course I had to continuously clean and replace the straw too, because she was in there so long. Eventually I could see her tail arched even more and she had become more “bagged up,” but it was still small. I learned that her bag would take a few years to get as large as the experienced does I’d seen at shows or on breed websites.

She ate voraciously and as far as I could tell, her ligaments were gone and her entire rear had become squishy. On the final night, I was sure it was going to happen, just as I was each night before, she was much more hunched over than she had been. It was a hunch I hadn’t seen yet, and that hunch-squat went on from 9:00pm until 4:00am the following morning.

At 6:00am on April 13th, there he was. I’d missed it and he was born smoothly, all on his own. But that’s about how everything with that little goat is, easygoing and fun. He is the complete opposite of his mother in every way: friendly, cuddly and curious.  Her little tongue moved meticulously over each part of the tiny creature and she seemed glad to have the help. She looked at me as if she thought,

“I don’t have any idea what just happened, but I think I’m doing what I’m supposed to.. and this is mine?” 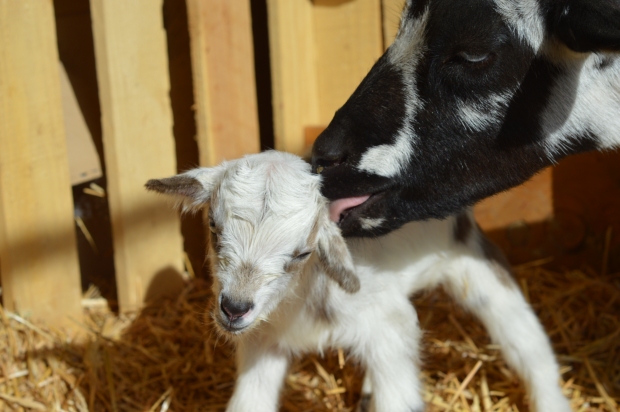 She was a great momma from the beginning and tried to help her kid find his way to her teat immediately. I brought out the bucket of warm water and molasses as suggested in numerous holistic online sources. She chugged it, rehydrating before returning to licking her new kid obsessively. The kid knew that he needed to be nudging on something to make milk come out, but he was nudging in all the wrong directions. Even when I aimed him at the teat, while Nilah patiently lifted her leg for him, he would nudge and bump at her belly, front legs and chest. Even with his face in front of the teat it took over an hour before he sorted out how to latch on to it, which he did just as I was really beginning to get worried!

Kids should get their first mouthful of colostrum within the first half hour of being born.

Because so many goats do have more than one kid, I was convinced there had to be another. I bumped her belly as instructed and it felt full, but there was no thump of a baby. By 10:00am I gave up on my hopes of another (female) kid and focused instead on baby Ely.

NOTE: *This blog includes affiliate links, which means I may receive a nominal commission when you make a purchase at no additional cost to you. I have not been paid for my opinion and any commentary on the efficiency of a product is solely my own opinion and experience.

One thought on “The birth of Ely”