Big brown eyes shaded with long eyelashes blinked up at me. Jerad had the calf squished tight between his knees, a rope around its neck. A warm breeze fought against the cool morning dew.   I had prepared the ear tag device, written the number 120, shoved it into the metal contraption with a large needle on one side. The momma cow looked on in horror as I pulled out the metal instruments to tag her little heifer calf. My other hand was equipped with another device with a band secured around it to band the little male calves.  Just a few feet away the momma cow bellowed at us, her eyes wide, ready to trample us to bits if we didn’t have that little calf between us, and her.

The calf had been born the night before, still a little moist from her mother’s tongue; her chocolate brown hair glistened against the morning sun. She didn’t know she should run away from us, or why she should be afraid of us, her momma hadn’t taught her that yet. “Just stick it right there in the middle of that pink part of her ear and push hard.” Jerad said calmly. I grabbed its little ear, it looked at me and licked its nose. Ready, I grabbed the ear and put the ear tag device around it, gripping the metal tightly … but not squeezing. “I can’t do it! You do it!” I said. “Yeah ya can. Just do it quick.” With one quick motion I grabbed her ear, squeezed as quick as I could and pulled the metal device back. Done. The little calf wiggled a little between his knees and then he let her go. She confusedly waddled on her shaky new legs back to her momma. They trotted off slowly up the hill. I’m sure that little calf will never trust people again.

It was a moment I’ll likely never forget. Two years ago at the vaccinating and branding of the years calves I flipped them and kneed them into the ground, they were flailing and bawling and kicking while someone came up to them with a fiery branding iron, to singe their flesh with the operation’s letters. It didn’t bother me much then. I jabbed em’ with needles, branded them, stuck their mommas in cattle chutes to vaccinate them. I think it had something to do with the innocence of that calf yesterday morning that broke my heart a bit to stick a tag through its ear. I’ve learned a lot about mommas and their babies through those cows. As the babies are born in the Spring, the cows will leave their babies with a ‘babysitter’ cow who plops down in the grass with a group of little calves at a time while their mommas go on grazing or to find water. The babies buck and play and run around with each other, as babies do.  The cows are all quite docile creatures, most of them over 10 years old and have wandered between the pastures of the properties their entire lives. They know the horses, the people, and the routine. Yet spring comes around and not one of those momma cows would hesitate to kill ya if you let her, and slipped up while taking one of her babies away.

While raising beef show cattle in high school I’d always pick up the little calves, mostly halter-broke around 400 lbs. Big little babies who I could still more or less drag around with a halter on, but as they got bigger, when they decided they didn’t wanna do something, I couldn’t make them . Oftentimes I figured they weren’t as dumb as I took them for. These spoiled show steers had to be bathed/rinsed daily and then have their hair blow dried upwards, the opposite direction that it grows so that it got used to sticking straight up. The puffier your calf is, the bigger boned it looks, the more appealing the calf is.  I had one black calf, who hated me. One day as he was tied up to a fence and I was washing him he lifted a back leg and gave me a good solid kick right on my ankle, barely lifting his leg off the ground. It swelled my ankle up for weeks. I could barely walk. I kicked him right back and he didn’t do it again. He was an evil little steer, when he was around 700 lbs he would pride himself in taking off while I was walking him. I, refusing to let go of his rope and give him the pleasure of breaking free, got drug across out entire freshly plowed alfalfa pasture as if on ski’s, and then down on my butt all half a mile down to the canal that he couldn’t cross. He then stopped, and I drug him home. After that day, I tied him to the hitch on my truck and made him trot tied to the back of my truck in attempt to teach him some manners and give him some exercise. I didn’t like that steer much. 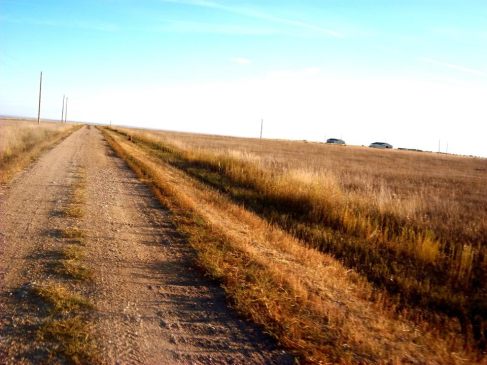 Spring break tugged at my country side, it reminded me of my livestock raising days. This out in Colorado is the real deal though, sunrise over the prairie plains, cows off in the distance, riding everyday, branding cattle, only seeing a few people a day. There are times in the morning when the wind doesn’t blow and the praire falls into a deafening silence. The sun beats down on my nose. Glancing around into the wide and quiet world … empty as if … no one else exists. The air is clean, the water is pure; the coffee is fresh. Out there on horseback you can feel one with the world again, as if you’re it, you matter, with the country, it feels natural and not bogged down by the rush and consumerism of the city. You don’t care about name brands, you can make a better soap from a goat’s milk, and all of a sudden that $100 haircut and color that you might want … doesn’t really matter when you can grab a pair of scissors and chop off the ends yourself, letting the strands blow of into the distance while laying out on the lawn. Long off in the distance the Rocky Mountain’s twin peaks loom over a blurred skyline from the cities at the foot of the mountains. There is nothing between the plains and those mountains.  I took the horses out to check the herd of cattle in the afternoons, often bareback, and I was reminded of the indescribable unity between horse and rider.  Mornings I would fill my coffee cup, slip on boots and jeans and wander the property to count the cows and check for calves, following the cow trails that generations of cattle had walked since the settlement of the old west. Old wagon trails still run through the more southern horse pasture, where a little canyon runs free.