Planning a trip to Washington, D.C. can be a complicated endeavor, especially when 56 students from 12 different countries are involved.

When the plans for the trip began some time last October, we began by reaching out to the museums, the White House, Pentagon and the like, explaining our unique group of travelers that would be visiting our nation’s capital for the first time. I felt it imperative to introduce our unique group to all of the places we would be touring. We printed out nametags with large logos of the Department of State and an American flag just below the students’ names and areas of study. “Tourism, Business Administration, Childhood Development, Media, Construction,” they read. Students wore them proudly through the airport, and boasted them next to people on the flight – the NWCCI took up the back half of the plane.
Due to recent negative attention in the media about certain groups of people in the United States, we were worried about how our group might be treated, stereotyped or viewed. But who better to be a shining ambassador of their country, than the NWCCI students? They were described in our recent press release as:

Yes, Pakistan. Pakistan has been in the news a lot recently, and not for the kinds of things our NWCCI students promote, as per the vision of the Department of State: “to promote mutual understanding between the United States and other countries and cultures.” Yet in true American form, one of the many traits that I admire so much in Americans – people we met were curious, welcoming and friendly about the students’ stories and wanted to learn more about our group. Even the security guard at the Pentagon was fascinated with the countries of each of the students, he explained that he’d been to many of them himself! In fact, the security office guards were the most polite and friendly security we encountered on the trip. And in true American “melting-pot” fashion, students were welcomed to Washington D.C. with vigor. Each and every place was happy to meet them. Students were excited to find restaurants featuring food from their home countries, many right around the blocks surrounding the historic Hotel Harrington. I heard rumors of Pakistani and African food, Yemeni restaurants and more. Diversity seemed as welcome as ever in the streets of DC.

The goal of the trip was to allow the students a special insight into the heart of some of America’s history and government by visiting the US Capitol, White House, Newseum, Smithsonian museums and monuments: the buildings upholding the core values of America. As NWCCI staff who are partially responsible for exposing participants to the U.S., we are continuoustly forced to ponder the question, what does it mean to be an American? We wanted to introduce them to as many people as possible so that they could share their story. We also wanted to invite them into the heart of where America began, in hopes that they might better understand the meaning of America. 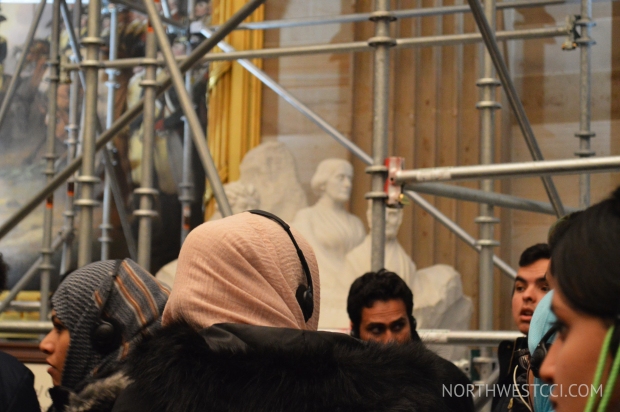 Students from Yemen, Turkey, Bangladesh, Colombia and Pakistan looking on as the guide describes the history of the portrait monument to three women’s suffragists – Lucretia Mott, Elizabeth Cady Stanton and Susan B. Anthony.

While many of the opportunities back at their colleges are for sharing their culture with fellow Americans and their community, this trip was a chance to learn about America. But I also wanted to make sure that each place we visited understood the uniqueness of the group they were about to welcome, and they had all received an introduction before our arrival. These students are studying in the US because they were hand picked for a scholarship in their home country. Imagine sitting in the Newseum in a small seminar room listening to a presentation on the First Amendment in the United States. Imagine listening to the concept behind the first amendment in a room full of people who don’t have this right in their home countries. Free speech? In fact, encouraging participants to speak up and have a voice is one of the most beautiful parts of the NWCCI program. Shy students become social butterflies as the year progresses. Participants learn how to have an opinion and speak their mind in classes, in public, in tours and to speak up in the classroom.

Headlines of newspapers around the world from that Monday, January 11th covered the wall to the right. Newseum

“Congress shall make no law respecting an establishment of religion, or prohibiting the free exercise thereof; or abridging the freedom of speech, or of the press; or the right of the people peaceably to assemble, and to petition the government for a redress of grievances.” | First Amendment | US Constitution

It is part of our unique American law that contributes to the uniqueness of the American spirit, it’s openess and adaptability to welcome to the world. America was founded by immigrants. The participants were fascinated to learn about the freedoms’ limits in regards to safety… or even as modern and social media rights in regards to a person’s privacy or image ownership. I think that initially the boundaries can be confusing. They learned about how our government and laws are malleable and able to shift and adjust as the times change.

While we were not able to make it inside the White House, we did visit the outside of the building and after successfully completing background checks on all 56 non-citizen participants as well as 5 US citizen chaperones, we were approved for entry into the United States Pentagon. After a thorough security screening, students trickled into the Pentagon.

Cell phones were turned off, cameras left in the bus.  A young man in the military barked the announcement that the 9:00am tour group (all 60 of us) could enter a special room. It was quickly apparent that this tour would be very different from our previous tours which had been full of selfies and long meanderings through museums. These tours are reserved far in advance, and we were the only ones on that tour at that time. We were split into smaller groups of 11-14. We stayed in single file lines on the escalators and stayed on the same side of the hallways as our guide. The tour was prompt and  precise.

In the memorial to those killed in the terrorist attacks on September 11th, we were free to roam around a tiny room with small memorials to the victims of September 11th. We signed our names with condolences in a guestbook, after that, the pace and order resumed. Our guide was a young man in full dress blues who kept a quick pace and walked backwards for the duration of our 1hr long tour. He never let anybody out of his sight. “And guess what I’m doing when I’m not giving tours of the Pentagon?” he prompted. “I’m cleaning and perfecting this uniform. And what am I doing when I’m not cleaning and polishing my uniform? I’m studying so that  I can make my tour the best it can be,” he smiled with confidence.

As an American, I was almost surprised at my growing patriotism throughout the trip. I found myself becoming more protective of our monuments and our history, the good and the bad parts of our history as the days of the trip progressed. Tears trickled down my cheek although I tried to hold them back as I read the names and stories of the people who had been working in the Pentagon on September 11th. As the tour continued, I felt increasingly proud to be a part of a country whose ideas were founded on a constitution created to endure and adapt.

The five-day trip concluded with a walk around Arlington National Cemetery. We announced as the bus rolled up to the parking lot that the cemetery was a place for respect, a place to pay respects to those who had fallen, those who had served their country and in fact funerals were taking place as we walked just a portion of the 624 acre grounds. We advised against selfies and galavanting across the grounds, because while they may not have a strong emotional sentiments there, Americans do. Many visitors were mourning the death of a loved one.

We wanted only those that had an interest to take a walk around the cemetery – the rest could wait on the bus. Many students joined us, somberly exploring the grounds; some in groups and some on their own. Upon each and every grave sight rested a wreath. We took a good hour visiting the eternal flame and the burial sites of the Kennedy’s, the fallen soldiers and the rows of other fallen Americans and their families. I’m sure they thought back to past wars and wars currently being fought in their own countries. Men and women fighting still, for freedoms and rights.

The nation’s history lay heavily on my heart that day. I was paying a sort of patronage as an American, to visit so much history of the land that created so much of who I am, and to those who fought for what it means to be an American. It is a unique proudness that has taken me many trips abroad to fully grasp and embrace. The trip to Arlington was the perfect conclusion to a trip full of historical tours that explained what all those Americans had died fighting for.

All 62 people from the NWCCI who traveled to DC