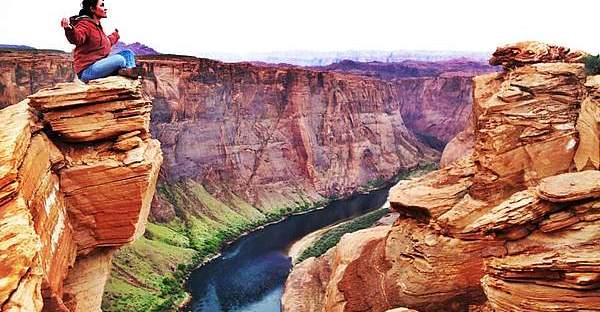 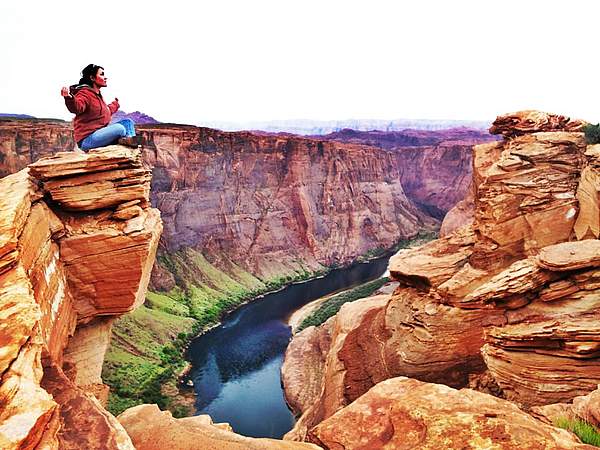 “Without inner peace, outer peace is impossible. We all wish for world peace, but world peace will never be acheived unless we first establish peace within our own minds. We can send so-called ‘peacekeeping forces’ into areas of conflict, but peace cannot be oppossed from the outside with guns. Only by creating peace within our own mind and helping others to do the same can we hope to achieve peace in this world.” – Geshe Kelsang Gyatso

The first buddhist I remember meeting went by the name of Rinzin. He wrapped himself in a red robe, had a shaved head and sparkling blue eyes. It’s hard to explain what captivated me so much in those eyes, except to say that it felt like I could see water flowing through them, a trickling stream. There had been flyers for “guided meditation” around the Language Arts building and campus where I regularly walked. One day a friend and I decided to see for ourselves the benefits of this meditation everyone spoke of.

The Buddhist Center was a small, white building just across the street from campus. It was a home that had been converted into a mini buddhist center. I had always admired the buddhist way of living: their core values centered upon leading a moral life, the compassion for all animals, being mindful and aware of thoughts and actions, and the search for developing wisdom and understanding.

When we entered the small buddhist center, Rinzin appeared and asked if I was there to attend the meditation. He was patient, and kind, and his words came out slowly and with purpose. He guided us to the meditation room and instructed us to sit. It was much like my experience in a catholic church service, except  we were the only other people there and the only person to follow, was Rinzin. In Germany I had watched the people around me in the famous Bamberg Cathedral, which was built in the 13th century, and did as they did.  I stood when when the crowd stood, and sat and kneeled when they did, too.

Of course in this guided meditation, there is no sitting or standing or kneeling, there is only mindfulness and meditating. I was lucky, it was only a 15 minute meditation and I tried to imitate what Rinzin did. I sat like he sat, I closed my eyes, and peeked out from under one eyelash on occasion to make sure he hadn’t moved. Or maybe just to make sure he too, wasn’t fidgeting. We sat in silence for the duration, and Rinzin never moved a muscle.  I, on the other hand, became fidgety after a couple of minutes. I tried to tense my core muscles to bring my attention back to myself and refocus my energy. I tried not to think about anything, and succeeded for the most part.

On an open road that stretched out for miles ahead one day during my Camino de Santiago hike in 2013, I learned how to separate my pain from my being, my thoughts from my body: pain from my desire to move forward. We had already hiked some 24 miles when we found that our planned stopping town had no room left in the albergues. Was I so exhausted because that is only how far I had willed my body to travel that day? Was I finding more energy in my body’s reserves? Some days it seemed like so many more miles, when I already thought I had nothing left. The pain seared through my body as I walked on, speed-walking actually, and I turned on my headphones and moved to the beat of the quick-paced song. I found a new gear, and instead of whining about the pain, or reacting to the pain, I separated the pain from myself and walked forward. It was a form of meditation on a dusty road in the middle of Spain, and I very much learned from that experience.

What do you do to remain mindful and “in the moment” in your life?

The college I work at now offers brown bag lunch talks on a regular basis and this week, the campus was visited by a buddhist who discussed humans’ interconnectivity to the earth, in relation to Earth Day. Buddhists believe that all things are connected, they also believe that we are not as individual as we might think we are. All beings are constantly in contact with other beings and therefore all connected, and constantly changing. One concept that resonated the most from the lecture is mindfulness. “Being mindful”, the man mentioned, “we must remember that what we do has an impact.”  I was reminded of how people become so wrapped up in their daily lives, their daily routines, that they are unaware of what they are doing. The words rolled confidently and slowly out of his mouth. He was aware of each word as he said it, no word or breath came by accident or coincidence. 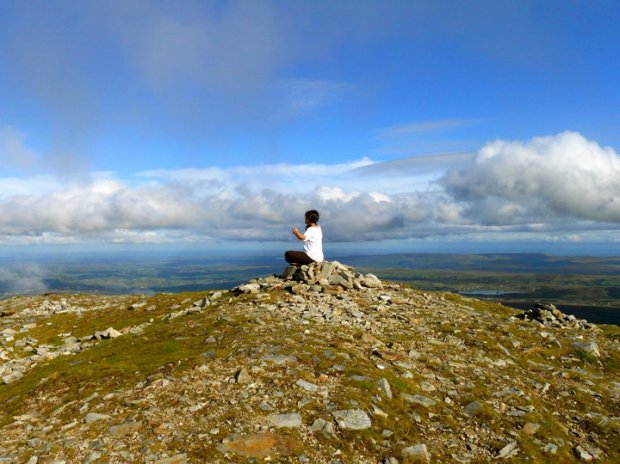 I notice young people dragging their feet so hard that dust kicks out behind them, the sloshing of the soles of their shoes goes unheard by their ears. They disrupt an entire room by their entrance. They are unaware that they they do it, or that their feet have an impact on others. Perhaps they have no concept of their bodies’ whereabouts in relation to the world around them, they are simply going.

Similarly, I notice drivers in the left lane of a 5-lane highway, calmly relaxing in the lane as if they were the only one on the road, where in fact, they are causing a large backup of cars behind them because nobody is able to get around them to go the speed limit, or speed if they so choose. Mindfulness. Their simple and uneducated decision to drive in that lane may have a lasting impact on the driver that is behind them who is losing his temper, who could end up flipping his car or crashing because of a poorly made decision, made out of rage at one driver’s actions. I must be mindful about not letting this behavior affect my own. People bump into things because they are unaware of their being in relation to the world around them, or they are moving too quickly for their surroundings. Being mindful of a situation and aware of what else is going on in it, is a lesson I think that everyone could learn from buddhism.

This goes along with their fantastic concept of karma, which in its most basic notion, describes that all of our actions have consequences (good or bad). Back to the scenario with the driver in the left lane, this one driver’s actions will undoubtedly have an impact on many drivers to follow. Perhaps someone else will be late because of their choice, or perhaps someone will make a bad decision to react to that driver’s choices. Everyone is moving, and everyone is impacted by the actions of others.

Buddhism teaches about impermanence. It is described similarly to a river, in that it is never fixed or permanent. “It moves from cause to cause, effect to effect, one point to another, one state of existence to another, giving an outward impression that it is one continuous and unified movement, where as in reality it is not” (Urbandharma.com). And as the speaker at the college said, “I am different now than I was this morning, and I will be different tonight than I am right now.” We are constantly changing, and in that belief, we are always being effected by those or that around us. The things that we see throughout our day will change the way we view something later.

The decisively characteristic thing about this world is its transience. In this sense, centuries have no advantage over the present moment. Thus the continuity of transience cannot give any consolation; the fact that life blossoms among ruins proves not so much the tenacity of life as that of death.

The concept that their teachings continuously circle back to, is that we need to be aware of those around us, and in order to do that, we must be aware of where WE are (physically, spiritually, emotionally.)  Likewise, we cannot properly care for a plant, if we are not aware of it’s needs, aware that on sunny days it may or may not need light: aware of whether or not it is receiving too much water. We must pay attention to what it tells us without speaking, similarly to our pets. Do you know how to listen to someone without talking? Do you know how to be confidante for a friend, or notice when something about them just seems off? This is all being mindful. 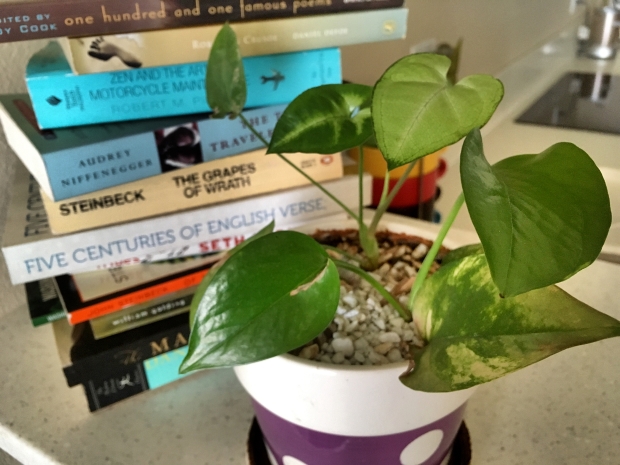 Many of these concepts could help us to understand how to refocus our energy when we are angry (i.e. the concept of breathing in and out when on the verge of saying something we shouldn’t in the midst of anger). It is a short jolt in our actions that reminds us to refocus our energy. I believe it is necessary for all people to find their own form of meditation, their own form of refocusing. It took me a long time to figure out what my meditation was. I find it on a long stretch of open road, on a dusty side street in the desert, from the fuzzy back of galloping horse, on the tiny saddle of my Cannondale, or scrambling up some mountainside, propelling myself forward with my own woman-made momentum. I find it in nature. It is in these places that I can nearly forget myself and become one with my surroundings, forgetting quickly about any worry or stresses I had before I left, and only focusing on the task at hand. I notice that when I go without any of the these for an extended period of time, I become cranky, and it takes me longer than I’d like to step back, and realize why.

One day on campus I watched as Rinzin, the buddhist monk, as he circled around the corner in his tiny, basic car. It was a rough little car. He is just a man, too, and in a way we are all just beings fitting in; searching for a way to be a part of the world around us.