There she was: a goat in a stanchion with a full udder, ready to be milked for the first time. Behind me was the culmination of about two years of dreams and planning to get to this moment. Of course after the initial excitement of baby goats wears off, you have a couple of weeks to wait for the next big event before you get to what you’re probably really breeding your goat for, milk! I waited the prescribed two weeks to let the baby get his full share and to let the colostrum all out of her system before I began.

I was terrified. Not of milking a goat for the first time, but because I was terrified that if she hated being milked, I would hate doing it, and I had signed on to this entire dairy goat project for the main purpose of having my own goat’s milk. I separated little Ely from his mom the night before to let her udder fill up. He slept in a crate beside her. We keep the goats locked up tight at night because of the abundance of predators in the area, including coyotes, owls (which could snatch up a little dwarf goat baby) and even bobcats!

Bright and early, at the first quack of duck in the morning, I brought Nilah up to my little milking stanchion that Brent built me two years ago. I showed him a stand from Pinterest and he fashioned a similar one while I was away on a trip. I let little Ely run around outside the fence and explore while I secured Nilah and gave her alfalfa and grain. She has already been well trained to stand in the stanchion because she has always been given treats there and I regularly trim her hooves on it.

I washed her udder with natural soap, warm water, lavender and eucalyptus essential oil. I found a neat natural recipe here. Then I began to massage and nudge the udder as goat kids do to get her to “let down” her milk. Already Nilah would not stand still. Preview of coming attractions: she hated all of it. She bucked and stomped and pawed at the front of the stanchion. “Not the bathing suit parts!” she snarled at me. I took the advice of another blogger who suggested tying one leg up. Using hobbles still allows the goat to stand on their front legs and pick up both back legs together and kick, or to sit down. Being such a small goat, Nilah had easily done both already, so I went for tying one leg, and it worked. 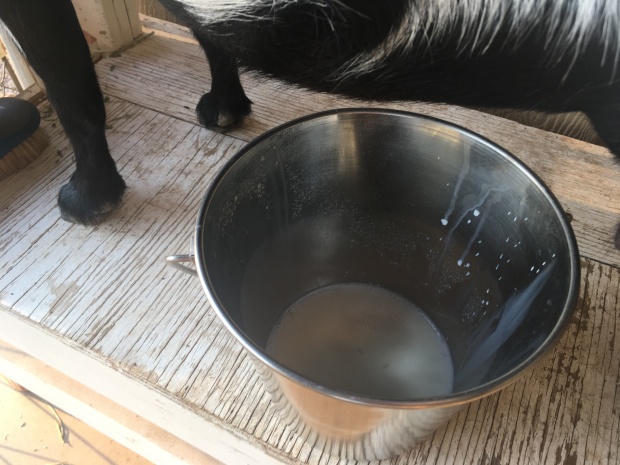 I squeezed off the top of the teat between my index finger and back of my thumb. It became almost a rolling motion, using the side of my palm as the milk streamed into the metal pail. I’ve learned to love the familiar ting of the metal as milk streams into the side of the pail. My short-lived dairy cow milking days lingered in the back of my mind and I fell into the rhythm of the squeeze and stream.

The first day I ended up not only losing most of the milk from her fussing, but apparently even aiming the stream the right direction takes talent. I sorted that out throughout the week, too.  I only got about 10% of that first milking. I was using a small, plastic tub and it was easily stepped in, so I lost all of that bit, then she kicked it over a second time. I didn’t drink any of the first milking, Hank got it all. I cleaned her udder again after milking and vigorously rubbed home made moisturizing oil with essentials oils on to prevent her skin from drying out.

Determined, the next morning I started giving her a stern “NO” in the same way I would tell my dog, when I could tell she was getting ready to start kicking. I require great manners of all my animals, and decided it shouldn’t be any different for my goat! Although I had never yelled at her in this way before. It’s taken a few weeks now to settle into a routine, and I still can only milk with one hand because I have to hold the pail with the other. I upgraded to my slightly larger, 4 quart stainless steal milk pail.

So if you’re here to find out how much milk a Nigerian Dwarf, the smallest of dairy goat breeds, can produce while still feeding her kid and only milking once a day, on her first freshening – mine is making a pretty consistent 8 oz a morning.

That’s maybe a cup or so? Just enough for my morning coffee, for now.  I have to stockpile it for any of my soap or cheese recipes by freezing.

Did you know that the mighty little Nigerian Dwarf goat’s milk has almost 2% more milk fat than any of the other dairy goat breeds? And with slightly more than the Nubian, their milk also contains more protein than all of the larger breeds. Now almost two months into a regular milking routine, Nilah will generally stand still as long as she has grain to eat. Occasionally she manages to forcefully knock over her grain bucket. I’m convinced it’s out of pure spite. And as soon as she finishes her grain all bets are off and her patience for milking is gone. I get a quick goat death glare, or she picks up each of her feet and stomps them, using one back hoof to try and pry my hand away. I’m learning to either give her more grain, or milk faster.

Who else has naughty milk goats? Did yours eventually settle down? One thought on “To the rhythm of the squeeze and stream”