The mighty Prickly Pear holds within it a powerhouse of benefits. It is rich in vitamin C and dietary fiber, low-calorie and contains antioxidant compounds. My desert tortoise uses the juicy cactus pads as a main source of nutrients, the local birds have figured out how to drill into the fruits and extract the sweet, almost magenta colored juice and seeds (and so have my own chickens),  and in the Southwest region in general the pads, pulp and juice of the fruits have long been used for food (Nopales anyone?) and the treatment of wounds and other ailments. Combining the juice of many fruits creates such a concentration of nutrients that it must be had in moderation!

Native Americans often used prickly pears to make colonche, and certain varieties of the cactus possess psychotropic components, including mescaline, making the cactus fruits useful for making Ayahuasca. One of the most popular uses of prickly pear is as a hangover cure, and it has been used to reduce headaches associated with too much alcohol for hundreds of years. (Organicfacts.net)

When I realized that I had my own large, healthy Prickly Pear Opuntia growing right in my (literally) backyard,  I set out to learn the ancient ways of harvesting and using them.

Actually many of the desert’s food sources call my backyard home. The house’s landscape, just outside of Phoenix and bordering the Tonto National Forest, has been left as natural possible, home to wild growing Mesquite and Palo Verde trees, Ocotillo, Creosote and five massive Saguaro cactus. The Jojoba shrub is a favorite snack for the goats and even my horse, who gobble down the Jojoba nuts and leaves like candy on trees. In the wild these plants provide food for the local deer, wild horses and many other desert grazing species. 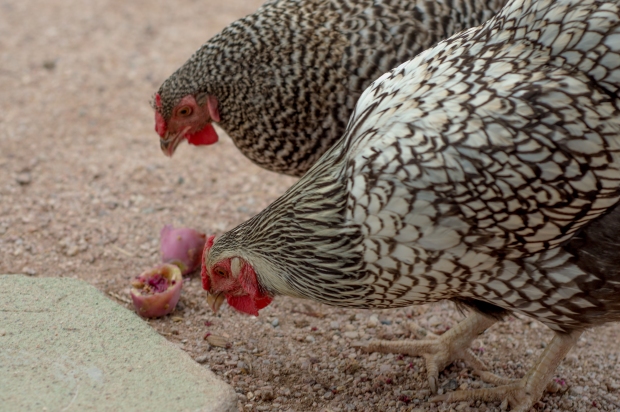 I wish I could tap into the knowledge of indigenous cultures who have passed down their recipes for generations, but instead I set out with a local foraging book and the internet and learned how to harvest and cook from my wild desert garden.

The Prickly Pear fruit must be harvested with tongs. I made use of some salad tongs and my stainless steel milk (usually used for milking the goat) pail to gather as many of the fruits as I could, quickly realizing that if I didn’t snag them a bit early, the Thrasher and Gila Woodpeckers (which I call the crazy zebra party bird because the males have zebra-striped wings and wear bright red party hats) would have their beaks in them before I could get to them. Don’t worry, I’ve left them some.

The information I found as to how to do this process seemed to leave out a lot of crucial and fine details. Having never done this before, my attempt was a lot of trial and error. Hopefully I can clarify all the areas where I had questions, now that I have done it sucessfully.

First, I rinse the fruits diligently in the bucket, not touching them with bare hands at all because they are still covered in the tiny, hairy glochids (barbs) that stick in your skin and swell. They itch and are a great nuisance. I let the fruits sit in the bucket on the counter for a few days to continue to ripen. If I attempted to pick them any later the birds would have already eaten them. Ripened fruit loses the long cactus barbs, but the tiny glochids remain. While rinsing the first time you may notice a lot of the longer barbs fall off, this is all part of the slow process of removing the glochids from the cactus juice you plan to consume.

Now that you have your fruits, plop the ripe fruit into a blender (a minimum of 5-10 of them if you want to make jelly or ice cream or other concoctions) and pulse. Pulsing pulverizes the pulp without blending in too much of the skin and and seeds. I find this method to be way easier than the numerous methods that discussed burning the glochids off over an open flame. There is another method that suggests freezing the fruits, in a mesh bag or strainer, then setting them out in the heat. As the fruits thaw, they shrivel and juice themselves (and you press out whatever doesn’t).

However you get the juice, the next step is to strain the mixture.  Pour it into a large strainer over a stainless steel pail or bowl. You’ll want to stir with a long spoon and smash as much juice through the strainer as possible. Remember, at this point it still has glochids that can get into your skin, be careful. Let the mix drain over a bucket until it stops dripping and discard the thick pieces (or take an extra step and separate the seeds from the cactus pulp if you didn’t put them in the blender, to press into the highly coveted prickly pear oil, a process I’ll address in another blog).

Now take the rich magenta juice and strain it into another bowl through a fine mesh sieve for your second layer of straining. This will catch more pulp and and glochids. Then take the final liquid/juice and strain it through one final layer, through two layers of cheesecloth before using the juice in any products. This final juice is free of glochids, seeds and cactus pulp and ready to use in jams, jellies, syrups, margaritas, soaps, ice cream, mead, wine or any other Southwest delicacy you want to try!

My first try at Prickly Pear Jelly (and canning in general) lead to a syrupy liquid that I nearly conceded to using as pancake syrup. After a tip to try reboiling jelly that didn’t set, I used powder pectin (which is apparently the trick, do NOT use liquid or any other form of pectin) and saved my jelly.

Here is the recipe that worked:

After 24 hours if your jelly has set it is ready to eat! Unopened, the boiled and sealed jars will last for quite some time out on the counter. Once opened, the jar must be refrigerated.

*Times listed here are for those at sea level. Use the chart below to adjust your time:

2 thoughts on “Harnessing the power of the Prickly Pear”